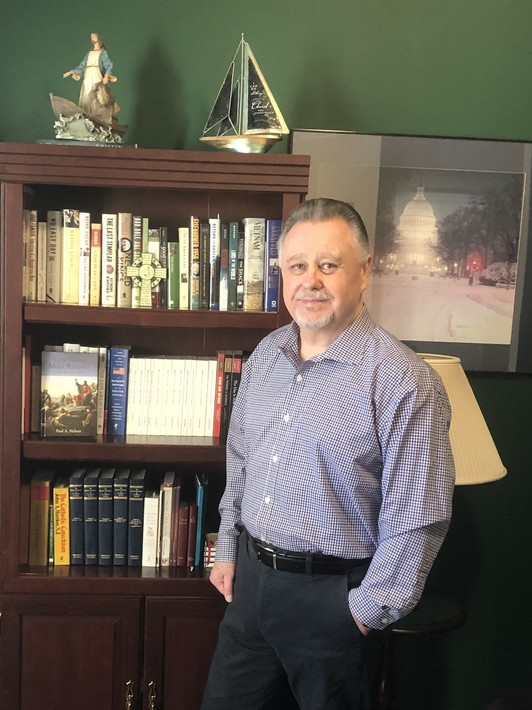 The Nelson children, one by one, began to choose Catholicism.  As a teenager, Paul started attending mass with his girlfriend, Nancy, and her mother.  After getting permission from his parents, he and his younger brother received instructions from a priest, after which they were baptized and confirmed Catholic.

When Paul was 21 and Nancy was 19, they were married by the priest who instructed the brothers in the faith.  The catechesis Paul and his brother Bill received was very weak, and even though they entered the Church, their knowledge of it was abysmal.  That ignorance would continue for many years into the future.

After raising their children in the Catholic Church, Paul and Nancy began attending a Baptist church, for reasons explained in his book, “Christians Must Reunite; Now is the Time.” You will also read about the circumstances that brought Paul and Nancy back to the Catholic Church in a profound way.  After years of self-study, Paul studied the in-depth courses of the late Servant of God Father John Hardon, who founded the Marian Catechist Apostolate, and became a Consecrated Marian Catechist. He continues to learn, which has taken his faith in God to a very high level. At this point in Paul’s life, he feels that God has given him a mission to help others know more about the Holy Catholic Church and, in the process, increase their faith.

In his professional life, Paul was a Court Reporter.  He spent 14 years working in State and Federal Court, but then moved to Washington, DC, to join the corps of Congressional Committee Reporters in the House of Representatives.  After one year, Paul transferred to the other side of the U.S. Capitol to work as an Official Reporter of Debates for the U.S. Senate, where he spent the next 27 years. He was honored to make the official record of many events of historical importance, such as the Inaugural address of President George W. Bush, the William Jefferson Clinton impeachment trial, among many others.  He was in the midst of some very consequential debates over the years, such as those in the aftermath of the 9/11 attacks on our country.